The semester is winding down and I’m working a bit now to catch up on some pressing tasks for The Digital Press. So, this week, I’m working on the layout for one of my more complex projects, Shawn Graham’s journal Epoiesen, for which The Digital Press at the University of North Dakota will publish an annual pdf and print-on-demand volume.

The articles in Epoiesen have a number of intriguing challenges. First, Shawn provided them to me in markdown (and my impression is that they are submitted in markdown). I’ve been a John Gruber fan for a long time and regularly read DaringFireball and was a devoted user of the new defunct Vesper app. In other words, I’m excited to work in Markdown. Unfortunately, markdown doesn’t play all that nicely with InDesign where I do my layout. As a result, I have to convert the files from Markdown to another format (and I’m converting them to .docx) to import them to InDesign using Pandoc. Pandoc is pretty amazing, but it is not super user-friendly and I haven’t figured out how to do batch conversions.

Each article in the journal has a little gaggle of information with it (paradata?) that includes the usual – author’s name and article title – but also other stuff like the article DOI, the various creative common licenses, and any other information about the article adds complications to the page. After a few failed efforts to incorporate that information and the text of the article on the 6×9 inch page, I decided to do a distinct title page for each article. What I decided, for better or for worse, is to celebrate the digital aspect of the journal by attempting to capture something of its formal digital character. So I divided the page into a series of distinct boxes, but rendered the lines as 50% to add a bit of depth to the page. 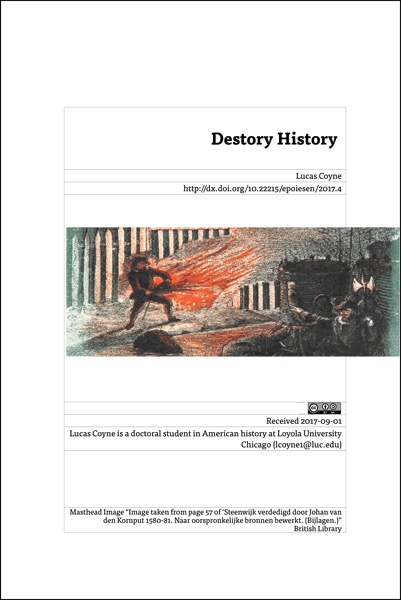 For font, I’ve stuck with Tisa, which I used in Mobilizing the Past. I like Tisa because it’s such a modern serif-ed font and it is quirky and relatively unusual so it gives the page a distinctive look. I’m not sure that I love it for the article title, but maybe I do!

As per usual feedback – particularly of the constructive kind – is always welcome. None of what I’m doing here is cast in stone.