Next month, I’m presenting a little paper in the form of a blog post at the 2021 CHAT conference devoted to pilgrimage. I don’t remember what my paper is titled, but here’s the abstract: In April 1997, the Red River of the North overran its bank and inundated the cities of Grand Forks, North Dakota and East Grand Forks, Minnesota forcing over 50,000 residents to evacuate and significant damage to both cities. In the aftermath of this flood, the two cities demolished a number of neighborhoods that stood close to the river, installed a series of massive floodways that run for nearly 15 kms along the course of the Red River, and constructed a new series of pump and lift stations. This work created a massive park, known as the Grand Forks Greenway, of over 8 square kilometers festooned with bike paths, river access, and recreation areas and separated from the residential and commercial areas of the city by a series of imposing earthen and cement flood walls pierced by gates.

I don’t think that’ll be the paper that I write though. In fact, I’m thinking more and more about how I might integrate the notion of pilgrimage to the space of Lincoln Park, a large urban park that is part of the Grand Forks Greenway.

Here’s my first effort to say something compelling.

Daily Pilgrimage, Movement, and Place on the Grand Forks Greenway

Almost every day for the past four or five years, I’ve gone for a walk through Lincoln Park on the Grand Forks, North Dakota Greenway. The walks aren’t terribly long, usually between 3 and 6 miles, and they follow a fairly standard course. They happen all year around from the heat of the summer to all but the coldest days in the winter. My walks take place in the rain, the snow, and the wind. I’m almost always accompanied by one of my two dogs: Argos (aka Argie “The Bargepole”) or Milo (aka “Milsey”). If the dogs were to tell it, they’d say that the walks are for them, but I do remind them that I make these trips without them sometimes and sometimes on my bike. In other words, these walks aren’t just a routines for the dogs, but fundamental to my daily routine. 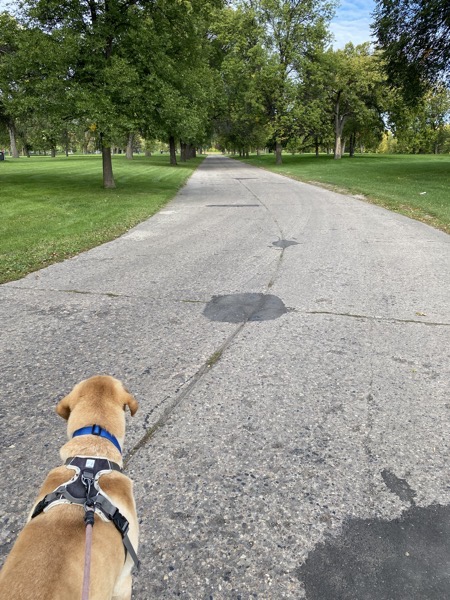 Pilgrimages, like most rituals, are types of routines that wrench one out of mundane existence and push one into a different space defined by movement, reflection, and even spirituality. In some cases, of course, a pilgrimage might be a once in a lifetime event, such as the Hajj, but in many cases, pilgrimages can happen more regularly. It seems to me that the key characteristic of a pilgrimage is not its frequency, but its relationship to the mundane aspects of daily life. As such, pilgrimages, as a type of experience, represents a particularly vivid example of the kind of relational category that archaeologists have increasingly used to think about their world.

My everyday life is deeply embedded in the digital world of screens, emails, documents, and data. My time on walks in the park is distinctly analogue. My mundane world varies relatively little depending on seasons, despite living in place where the seasons are intense. Even during the most bitter cold or the hottest late-summer, during draughts or floods, in the raking light of the winter or the dusty harvest clouds of autumn, emails continue to arrive, text continues to require editing, students continue to want guidance, and colleagues consultation. My daily pilgrimage disrupts my tendency to immerse myself in such mundane tasks and forces me to confront the variability of the seasons and weather, happenstance of encounters in a public space, and my own thoughts as they wander over the course of an hour without the advantage of regular professional (or household) distractions that would allow them to take purchase. 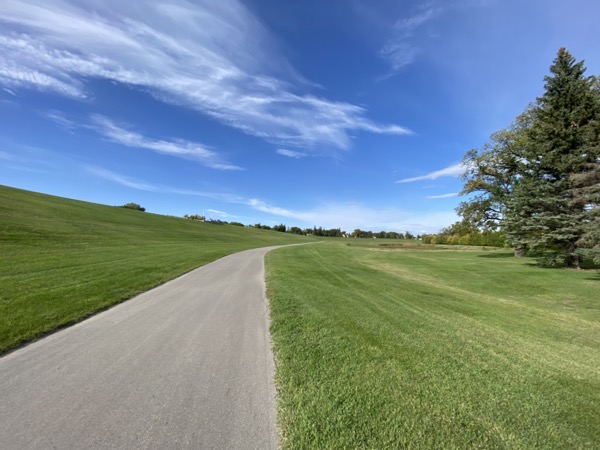 Part of what allows for the distinction between my daily pilgrimage and what I’ve called my “mundane world” is the space of my daily sojourns. My walk begins ordinarily enough in my backyard and then I head due east down 8th avenue which is interrupted after about 200 meters, by the 8 m tall bulk of a flood wall that forms the western edge of the Grand Forks Greenway. The Greenway runs for nearly 15 km on both sides of the Red River of the North which snakes its way though our small community of around 100,000 people on its way to the Hudson Bay some 1000 km to the north. The river floods regularly as it runs along the bottom of the long vanished Lake Agassiz, a massive glacial lake that discharged some 9,000 or 10,000 years ago, and in 1897 and again in 1997 massive floods nearly destroyed the cities of Grand Forks, North Dakota and East Grand Forks, Minnesota. The second of these floods prompted the evacuation of the cities and this constituted the largest peacetime evacuation of an American city prior to Hurricane Katrina landfall in New Orleans in 2005.

My daily pilgrimage passes a pumping station that serves to maintain the back pressure on the Grand Forks sewage and storm drain system and prevent flood waters from flowing through the drains and entering the city. It is here that pipes run beneath the flood wall and through the pump station that I go over the flood wall to enter the Greenway. This part of the Greenway is called Lincoln Park. It’s the largest park in the Greenway system and includes all the amenities common the an American park: walking and cycling trails, a frisbee golf course, some open fields for sports, a dog park, a warming house and, in the winter an ice rink and cross-country ski trails. There are places for picnics and a boat ramp for access to the river. Just south of Lincoln park is a small golf course. 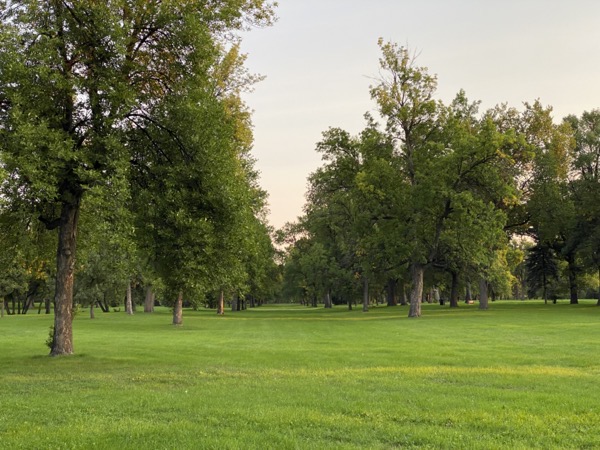 This rather ordinary setting seems like a hardly appropriate setting for a pilgrimage, but Lincoln Park does had a somewhat hidden past. Prior the 1997 flood, Lincoln Park was a thriving neighborhood but the creation of the Greenway and the the new network of flood walls required the razing of the homes and an elementary school here which would have stood on the “wet” side of the walls. The remains of this neighborhood, however, haunt the park. Trees continue to mark the routes of roads, the regular pattern of depressing in the park’s well mowed grass follow the rhythms of razed houses, and from time to time bricks, concrete pavement, and gravel paths peak through the grass to remind us of this place’s past. There is a small sculpture and a map made of inlaid bricks commemorating the lost neighborhood, but someone not familiar with the story behind these features might miss their meaning. 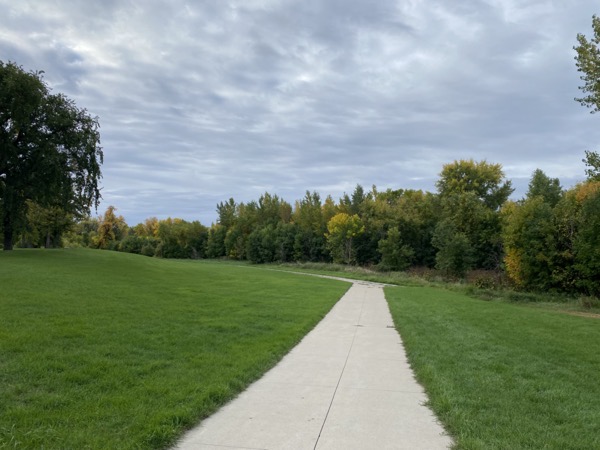 The visible and invisible history of Lincoln Park presents a compelling backdrop to my daily pilgrimages which takes me onto a path that follows the course of the river between the endemic cottonwoods that inhabit the water’s edge and the ornamental cypress and crab apple trees, the elms that line the now vanished streets, and the pine trees that stood at the edges of properties. White tail deer, squirrels, foxes, songbirds, hawks, eagles, owls, and the occasional human runner, canine companion, and occasional park employee, patrolling police officer, and metal detectorist stare my pilgrimage space. The initial, post-flood planning stages for the Greenway emphasized its potential to act as both a recreation area and as a riparian corridor for local and migratory wildlife. At the same time, the various environmental studies of Greenway acknowledged that many of the species present along the river’s course had a long history living in urban environments and sharing their space with both people and our domesticated animals. Like the pipes managed to control the flow of river water back into the city, the riparian corridor does not end at the edges of flood walls, but extends into the neighborhoods that flank the river.

The landscape of Lincoln Park contributes to its status as a pilgrimage site by emphasizing that it defies easy definition. It is neither a purely natural space, if such places are indeed possible in the Anthropocene, nor a space dominated entirely by humanity. The visible remains of earlier human activities overgrown and obscured by both natural and cultural processes transform Lincoln Park into the sort of liminal place that characterizes pilgrimage routes. Its temporal state as a place in transition from a tidy small-town neighborhood to corridor designed to both accommodate the spring flood waters and the movement of wildlife ensures that the landscape explicitly resists simple definition. Like so many discussions of time in archaeology, Lincoln Park makes clear the past is not distinct from the contemporary and both exist in a space of blurry boundaries. 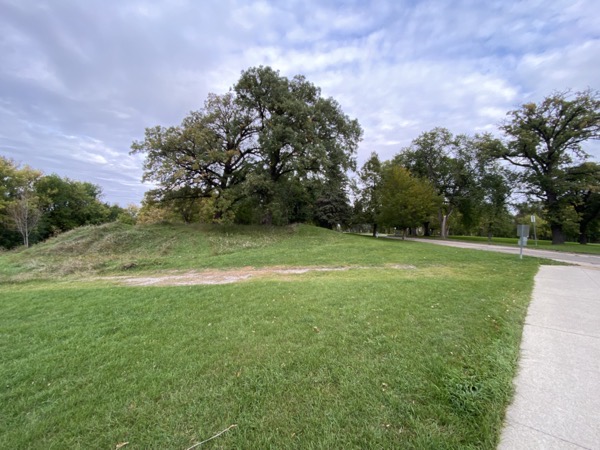 By complicating our every day expectations that the human and the natural occupy tidy categories and the past and contemporary are distinct, the park encourages us to establish a sense of communitas, to use Victor Turner’s fortuitous concept, not only with past and contemporary individuals (and my canine companions), but also with those non-human features of the landscape, from the raking light of the winter sun to the unseen scurrying creatures on the riverbanks or the depressing depressions marking out overgrown roads.

My daily pilgrimage, then, introduces me to a complicated time and space that is distinct from the tidy definitions traced by the imperious modernity of our daily lives.