Over the last few weeks, I’ve been working with the data collected from the Western Argolid Research Project. Mostly this has involved going through the survey unit data that we collected as a way to determine general patterns of artifact recovery rates from across the survey area. This is important work, but largely unrewarding. I had run many of the queries on the fly while survey teams were still working in the field and had started to recognize the general patterns as they were emerging in the data. That said, it was still necessary to check things with the complete data set and I’ll post some more on this next week.

For today, I want to post on another aspect of my work with the WARP data. Over the three main field seasons, we conducted a series of revisits to our survey units to collect additional samples of material from the surface. Teams did this by collecting all artifacts in a circle with a 2 m radius from the survey units. We selected units for resurvey on the basis of location within the survey area, surface visibility, and artifact densities.

These revisits had two main goals. First and foremost, we sought to use them to calibrate the assemblages produced through our standard survey methods where we collected density data and artifacts from a 20% sample of the surface through traditional field walking techniques. Secondly, we hoped that these total collection circles would also provide us with more robust samples from units where visibility, for example, compromised artifact collection.

I had started messing with this data in 2018 and made only a tiny bit of impressionistic progress. The biggest challenge for me was figuring out how to compare the three assemblages in a useful way. I discuss some of my difficulties here.

The biggest challenge was dealing with various chronologies that we assigned to our ceramics. The chronotype system allowed our ceramicists to assign a range of chronologies (and dates) to artifacts recovered in the survey. In some cases, these were immensely broad (e.g. “Ancient Historic” which has dates from 1050 BC to AD 700) and in some cases they were particularly narrow (e.g. Roman, Early which dates from 50 BC to 150 AD) and, in many cases, they were of more middling resolution (e.g. Roman which dates from 50 BC to AD 700). The different assemblages produced artifacts not only from different periods, but also from periods with different chronological resolutions. So answering the question whether more intensive collection strategies, such as total collection circles, produced different or just more material had to take into account the different resolutions at which we identified artifacts. In other words, we had to figure out whether recovering material dated to the “Early Roman” period in a resurvey circle mattered if we collected material datable to the broader, but inclusive “Roman” period in standard survey.

The solution to this problem was doing a little Aoristic analysis as a standardized way to represent the chronological profile of different assemblages. Aoristic analysis assumes that all artifacts have an equal chance of appearing in any year of a given chronological range. In other words, an artifact dated to the Roman period has an equal chance of appearing in any year between 50 BC and AD 700. Artifacts from more narrow period have greater values per year reflecting the increased likelihood that they would appear in any given year in the span. To complicate matters a bit, I also factored in the number of artifacts from any particular period. As a result, the charts that follow reflect not only the likelihood that an artifact dates to a particular year, but so the quantity of artifacts present in the assemblage with any probability of appearing in any particular year. I recognize that this is combining apples (that is probability of any artifact appearing in a year) and oranges (the quantity of artifacts present with various probabilities), but if we are using Aoristic analysis and its corresponding visualizations as a heuristic, then this kind of conflation is maybe a reasonable way to combine various kinds of data into one chart.

Let’s look at some data. For the unit 2517, which is near the acropolis of Orneai and had 30% visibility, we did standard survey and two total collection circles. The standard survey produced 89 artifacts and the resurvey units produced 77 and 146 respectively. Despite the differences in quantity, the assemblages had rather similar profiles with the only exceptions being a bump in the Early Bronze Age generated by a small number of rather diagnostic EHI-II and EHI sherds. Resurvey 1 produced a Late Roman and an Early Medieval sherd which created the slight bump in the orange line. The presence of artifacts dated to the Archaic-Hellenistic period in Resurvey 2 created a more nuance profile in the centuries prior to the notable Classical-Hellenistic spike. The general similarities of the two profiles reflects the basic similarity between the three assemblages, but it is clear the material from resurvey did provide chronological nuance to the 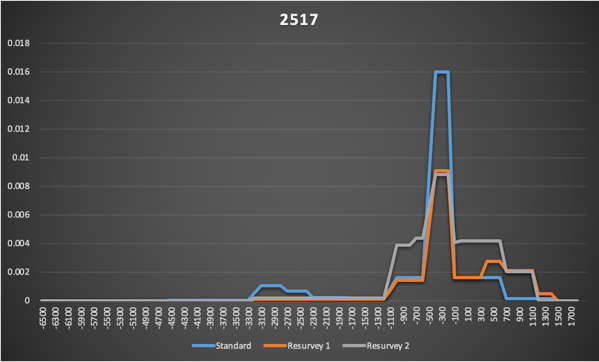 Similar to unit 2517, the basic profile of the assemblages appear the same, but the resurvey units do produce some notable spikes. Resurvey 2, for example, produced a single Late Helladic IIIA sherd. Resurvey 3, recovered 6 artifacts dating to the Archaic-Classical period and one Archaic sherd producing a narrower spike than the material dating to the Archaic-Hellenistic period recovered in the standard survey and in Resurvey 2. Resurvey 1 produce a single piece of Ottoman semi-fine ware which has a narrow 120 year date range and produced a late spike in the chart.

I have more case studies withs smaller assemblages that I’ll share later this week, but for now, this kind of visualization seems to be a useful way to compare groups of artifacts produced by different methods from the same units. What this will reveal about survey methods, both in general and in different circumstances, remains the question that more analysis will hopefully answer!