As the semester looms, I’m struggling a bit to stay on task and trying to balance my time between writing, reading, and preparing my fall classes. I’ve also been a bit under the weather.

Today, I wrote a bit more on the archaeology of military camps and campuses, which is another chapter of my ongoing (slow going?) book project. This chapter (chapter 6) will deal mainly with the archaeology of military camps, the Cold War, and the contemporary college campuses. I posted the a very rough draft of the introduction on Monday. Here’s another chunk of it.

And here’s a cool photo of the Nekoma Pyramid here in North Dakota. Rumor is that it’s for mind control (that’s not true and it’s really not the rumor, although I wish it was). 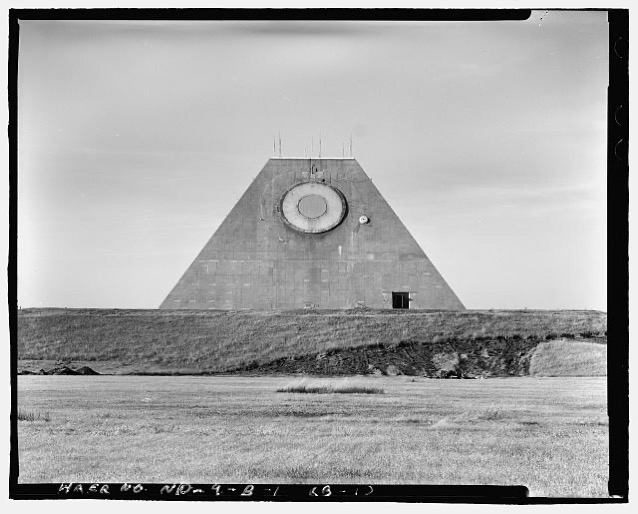 The archaeology of the military bases in the late 20th and early 21st century offers a distinctive perspective on both the archaeology of the contemporary world and the place of Cold War and post-Cold War military installations as representative of broader trends in American material culture. As the previous chapter noted, the growing trend to hardened and fortified borders and walls often incorporated aspect of military architecture. This not only involved the liberal use of poured concrete structures evoking the dystopian figures of Brutalist architecture as well as clear references to the large-scale mid-century military architecture but also sometimes included the literal reuse of Vietnam era military structures like metal helicopter landing pads. The growing visibility of borders and walls represents just one way in which military architecture has come to the fore in 21st century American society and echoes Virilio’s attitudes toward the visibility of World War II installations in Europe through which military values, attitudes, and forms increasingly entered all aspects of European life. The growing visibility of military priorities into the public consciousness is perhaps nowhere more obvious than in the late-20th century ”space race” which paralleled Cold War competition in science and technology and the development of rockets for space flight as well as the delivery of ballistic missiles (Gorman 2019). In the 21st century, military technologies touch upon nearly every aspect of daily from the use of military GPS technology to the such diverse expressions as nuclear power, the militarization of police forces, and even the internet itself.

From an archaeological perspective, then, the significance of military installations and research sites extend well beyond the military sphere. Indeed, many of the challenges associated with documenting and preserving significant structures on military installations speak to issues common to such work in a range of contexts in post-war and 21st century America. John Schofield, for example, noted that military installation frequently consist of the “teeth” and the “tail” (Schofield 2009, 29). The teeth are structures that often serve specific military purposes such as fortifications or missile silos which tend to resist repurposing on account of their specialized design and often massive and hardened forms. As a result, these structures tend to persist in the landscape even after they no longer serve their intended function. The so-called ”Nekoma Pyramid” or the Stanley R. Mickelson Safeguard Complex, for example, in Cavalier County, North Dakota was part of an abortive nuclear missile tracking system constructed in the early 1970s and abandoned after only 4 months of use. Until its sale to a local Hudderite colony in 2013, the site has stood empty and unused on the Northern prairie for nearly 40 years (Hanson 2016, 61-62; Hubbs 1992). A similar fate awaits the various ICBM sites scattered across the Midwest, for example, as well as specialized research facilities and nuclear testing sites across the American West. The tail, in contrast, includes buildings of less specialized designs that could be easily repurposed over their lifetimes in ways that make understanding their original functions and subsequent history difficult. Schofield notes that guidelines established in the 1990s in the U.K encouraged “sympathetic reuse” for buildings associated with the “tail” (Schofield 2009, 29).

Both the neglect of military sites and their repurposing present challenge associated with the preservation and documentation of military sites, but also speak to the contrasting aspect of their contemporary character. Modern, post-war architecture, for example, often privileged the adaptability of design which allowed buildings to be easily reconfigured for new purposes. At the same time, the use of reinforced concrete, steel, and more specialized, synthetic materials present new challenges for maintenance and restoration work as well which are then compounded by the often massive scale of late 20th military sites. Caitlyn DeSilvey’s study of the closed military facility at Orford Ness in the U.K. emphasized the way in which the decay of the reinforced concrete structures interacted with the natural surroundings to create a landscape sufficiently distinctive that when the National Trust acquired the property as a wildlife preserve, they decided to allow the military structures to continue to decay (DeSilvey 2014). This decision, however, has recently been met with some ambivalence from heritage authorities who have become interested in the site as part of the UK’s military heritage (DeSilvey 2014, 87). As another example, Todd Hanson documents the challenges associated with preserving The Trestle, a massive entirely wooden structure designed to test weapons that used Electromagnetic Pulses to disrupt electronics located at Kirkland Air Force Base near Albuquerque, New Mexico. Because the structure is entirely made of wood, preservation costs would be prohibitive despite the unique character of the structure. The Trestle went out of use in 1991 and now will deteriorate in the New Mexico desert.