About 4 months ago, I imagined this summer as a series of three or four week blocks during which I’d work on one or two tasks. Now, six-weeks into the “new normal” my summer has become an exercise of juggling a bunch of overlapping deadlines.

Among the more exciting of these deadlines are a series of book from The Digital Press at the University of North Dakota scheduled to appear in August, September, and October.

I’m particularly excited to get back to working on a book that’s due out in September: Kyle Conway’s edited volume Sixty Years of Boom and Bust: The Impact of Oil in North Dakota 1958-2018. It will be a particularly significant contribution to the growing “Bakken Bookshelf,” and contains articles by most of the leading scholars on contemporary North Dakota and the oil boom.

After a few weeks of going back and forth on cover design, I can now say with some confidence that we have a cover. 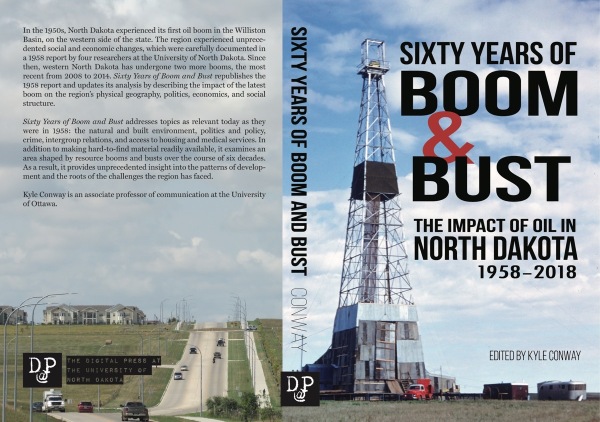 We also have a finalized text for the back of the book:

In the 1950s, North Dakota experienced its first oil boom in the Williston Basin, on the western side of the state. The region experienced unprecedented social and economic changes, which were carefully documented in a 1958 report by four researchers at the University of North Dakota. Since then, western North Dakota has undergone two more booms, the most recent from 2008 to 2014. Sixty Years of Boom and Bust republishes the 1958 report and updates its analysis by describing the impact of the latest boom on the region’s physical geography, politics, economics, and social structure.

Sixty Years of Boom and Bust addresses topics as relevant today as they were in 1958: the natural and built environment, politics and policy, crime, intergroup relations, and access to housing and medical services. In addition to making hard-to-find material readily available, it examines an area shaped by resource booms and busts over the course of six decades. As a result, it provides unprecedented insight into the patterns of development and the roots of the challenges the region has faced.

Here’s a link to its table of contents.