One of the things that I’ve been gently working on over the last few weeks has been the analysis of some of the data that we’ve collected from Grand Forks on mid-century housing. We’re still at the early stage of trying to understand patterns and it goes without saying that what we’ve documented are the houses that still exist, rather than those that were built or lived in.As a result, our data will be skewed by preservation.

That being said, when we look at the location and date that the houses were built, they appear to follow larger trends in the development of the city. While a few outliers exist — that is houses that are much earlier or later than the houses around them — most of the houses in Grand Forks are consistent with their neighbors. Of course, certain neighborhoods were lost entirely, but Lincoln Park and parts of Riverside appear mostly to have been pre-war meaning that they might not skew our data on post war housing, by too much.

For example, the chart below shows the main types of housing present in Grand Forks. 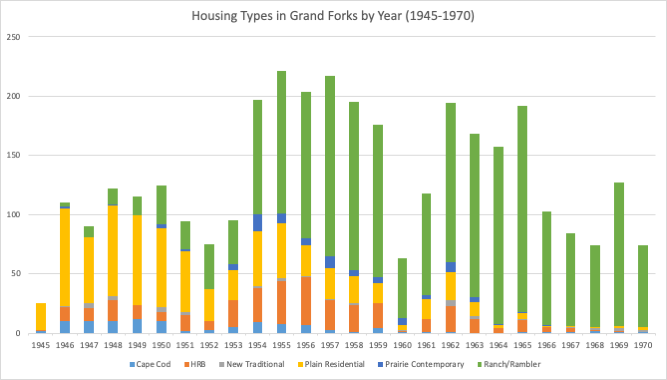 The most common type from the mid-1950s on were the 1-storey ranch or rambler. Prior to that period, though, there was considerable variety in housing with Cape Cods, Hip-roofed boxes, and various plain residential styles side-by-side in neighborhoods. In the mid-1950s, Grand Forks saw the construction of a number of houses in the “Prairie” or “Desert” contemporary style. It’s tempting to connect these with the construction of the iconic Wells-Denbrook studio building on Cherry Street which was built in 1954 in the Desert Contemporary style, but it’s more likely that their studio was part of a larger trend.

Another little query that we could run simply was the rise of the attached garage. This was the manifestation of two trends. First, most detached garages faced alleys and by the late-1950s, most homes in Grand Forks no longer had alley access. 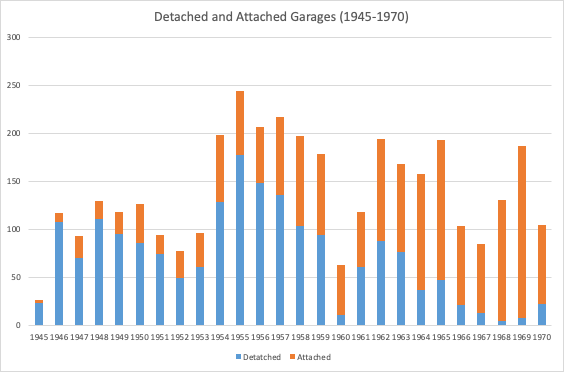 By the early 1960s, the convenience of an attached garage which mostly opened onto the front of the house was a desirable, if not mandatory feature, for new construction. The role of the front facing garage (sometimes puckishly called “garage with attached home”) in defining late-20th century domestic architecture (and a scourge of 21st century architecture) emerged as part of the changing relationship between the house and the alleyway and the rise of automobile culture.

It’s nice when the data we’ve collected reveals these trends so clearly.

Houses also got bigger in Grand Forks between 1945 and 1970. Again, this shows their square footage TODAY rather than when they were built, but I would guess that the basic trend toward larger homes is consistent.

In 1945 and 1946, the average home was under 1000 square feet; by the late-1940s, home had gotten larger and the trend continues through the 1960s. The year 1960 remains a strange anomaly in our data with only 50 homes built and they tend to be a bit larger than pervious or subsequent years. We need to try to figure out what’s going on then (and whether it’s a data problem or something “real”). By the early 1960s, the average home was over 1200 square feet where it remained for the rest of our study period.