This weekend ended up being a good time to hunker down with a book, a couple dogs, and some student work (and a few footballing contests) and tough out the first storm of the winter.

First, the best thing about the weekend, though, was the appearance of my first piece in Epoiesen. Epoiesen is an innovative journal for “creative engagement in history and archaeology” edited by Shawn Graham at Carleton University in Ottawa. Instead of the traditional peer review process, Epoiesen complements each paper with a pair of open responses. In some cases these responses are reviews and in other cases they simply riff on the original piece.

My piece is a response to an album and essay written by Andrew Reinhard called Assemblage Theory. It’s an attempt to write in a more breezy, conversational style and to bring together my interest in music and archaeology. It’s also another effort to consider how archaeological thinking can open new ways of seeing the contemporary world. As I was writing the piece, I thought of it as a continuation of the tradition of Punk Archaeology.

You can read it here.

And better still, you can comment on my piece (or any of the pieces in Epoiesen) using the Hypothes.is plug in. I’d love to have a conversation about my piece or Andrew’s piece.

Second, I spent a few hours with Miguel Angel Cau Ontiveros and Catalina Mas Florit’s new edited volume, Change and resilience: the occupation of Mediterranean islands in late antiquity (2019). As readers of this blog know, I’m trying to pay a bit more attention to Late Antiquity these days and doing what I can to catch up on a massive and growing body of scholarship. Since I’m giving a paper next month on Byzantine archaeology and islands (and Cyprus in particular), I’m trying to think about how some of the concepts developed in “island archaeology” (in the sense proposed by Paul Rainbird and Cyprian Broodbank) have shaped our understanding of insularity in historical periods. So far, it appears that these ideas have only filtered unevenly into our understanding of Mediterranean islands during Late Antique and Byzantine times. There is plenty of intriguing archaeology being done on islands – from the Balearics and the Cyclades to Sardinia, Sicily, Crete, and Cyprus – but very little of it considers explicitly the issues of insularity, isolation, and connectivity that are so central to the discourse of island archaeology. Those that do, however, rarely compare the situation of islands to the situation of Mediterranean microregions (in the sense of Horden and Purcell) more boardly. That is: is an island any more insular than the kind of small coastal valleys that are so common around the Mediterranean basin or a peninsula with a narrow isthmus? It is easy enough to argue that these places are “island-like” (e.g. literally in the case of the Peloponnesus), but is there enough to distinguish them from real islands for an island archaeology of the Byzantine or Late Roman period to be intellectually productive?

Finally, it had been about four years since I had updated my mobile phone. My old phone had about 8 hours of battery life if it wasn’t used. Everything else about it was decent but not great: the camera, the size, the speed, et c. So after some angst, I upgraded.

When I go to meetings, I always admire the people who pull out their phone and seem to have the world at their fingertips. They have their schedule, their contacts, relevant facts, and everything else right there. When I pull my phone out, I’m as often lost in one of a few email applications, trying desperate to search for some basic information on the browser, or wondering why my phone isn’t in sync with my computer or various cloud drives. In short, I’m not a phone person.

The thing is that I want to be a phone person. I admire their confidence and organization! So my solution, as materialistic as it sounds, was to upgrade my phone. Not only did I get a bigger phone, which I’m hoping makes it easier to engage with, but I got a fancier and faster phone with a better battery, camera, and processor. The plan is to actually use it. Regularly.

And not just for dog photos: 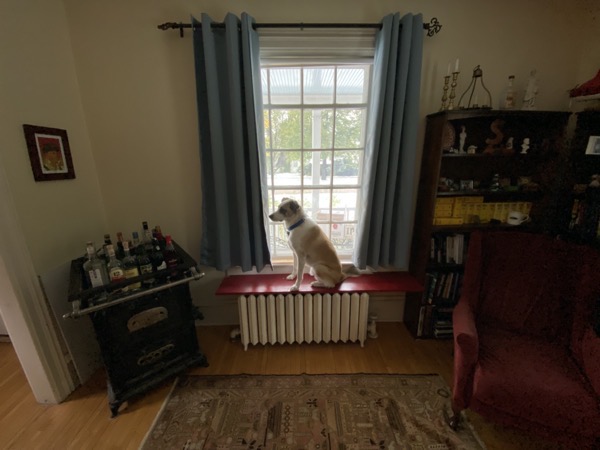