Yesterday, I wrapped up the first of my of three little study seasons and traveled from Cyprus to Greece.

As a kind of poetic gesture, our long-gestating article on the South Basilica at Polis appeared yesterday in Hesperia 88 (2019). Here’s a link to it (and if you want an offprint and don’t get the Hesperia, drop me an email or a DM on the Twitter).

The article offers an archaeological argument for the date of two phases of the South Basilica. The second phase will likely be of most interest to architectural historians for Early Byzantine Cyprus because it involves the conversion of the church from a wood roofed structure to a barrel vault. We also managed to phase, and date, the construction of the narthex and a portico that ran the length of the southern side of the basilica. Plus, there’s a massive “French drain” (and who doesn’t love Mr. French’s drains?) designed to help deal with the flow of water against the south wall of the church. 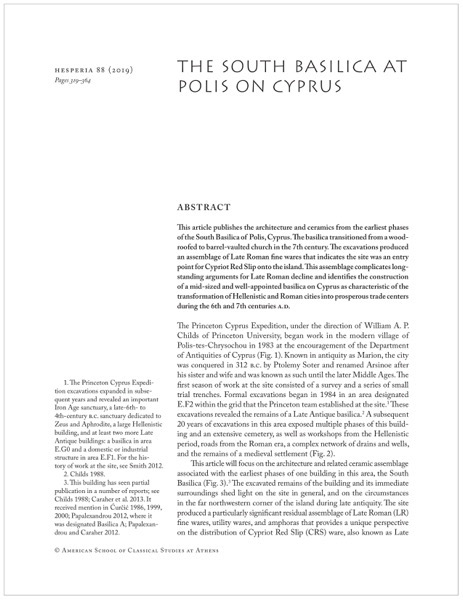 The weakest part of the article is our discussion of the urban context for the basilica, and, in fact, this is a work in progress for our understanding of the site of Polis and the arrangement of Early Christian churches in the changing urban landscape of Late Antique Cyprus more generally. If you’ve been reading this blog, you’ll undoubtedly know that this is something that I’ve been thinking about lately.

We’re also happy that this article involved links to our publication of data from Pyla-Koutsopetria in Open Context. This summer, we’ve started to work a bit on the “digital backbone” for Polis in Open Context (as well as preparing the data from our excavations at Pyla-Koutsopetria and Pyla-Vigla). This involves making our notebooks available as well as our analysis of the context pottery. The inventoried finds from Polis are already available on Open Context in draft form, but they will acquire addition significance only when linked to descriptions of the excavations and other material from the trenches. This is a big job for the area of E.F2 (in the Princeton Polis grid) which includes the South Basilica, but we hope to produce a model for organizing the E.F2 data using the smaller and more manageable area of E.F1 over the next few months.

Thinking about digital publication and curation of archaeological data is always good thing! For the next week, my old buddy David Pettegrew and I will be working with Jon Frey and Tim Gregory with some Isthmia Excavation data and trying to wrangle and think about how best to organize, disseminate, and curate their data. More on that over the next week or so…