A few weeks ago, I posted on the problem of “managing the modern landscape in intensive survey.” This week, my conceptual musings actually require operational decisions. By the end of the week, we’ll be surveying around an abandoned modern settlement in the Western Argolid.

The site is beautiful, relatively secluded settlement established by transhumant herders probably in the late 19th or early 20th century. There are a gaggle of traditional Balkan-style long houses which are generally divided into two spaces: one for the animals and one for the people. There are corbeled ovens, leaning sheds, alonia (threshing floors), and mandres (animal pens). The site is surrounded by fields and the houses themselves form an uneven scatter across the lower and middle slopes of a narrow valley.

The project directors and survey team leaders visited the site yesterday afternoon during a gentle rain shower and thought about how to approach the complexity of the modern period site, the abundance of artifacts, and the relationship between houses and other features in the landscape.

The site offers a few challenges.

1. Artifact Distribution. Over the past 12 hours, we have discussed endlessly how to deal with the dense scatters of artifacts associated with the abandoned houses. These scatters consist primarily of roof tiles, but since each house may have as many as 3,000 tiles, there is a real opportunity to blow out our ceramics team and storage facilities for very little new information.

So how do we go about documenting the scatter of tiles surrounding these houses? If we simply survey the houses as part of our traditional 2000 sq m survey units, the unit will show a density influence largely by the scatter of material associated with the immediate vicinity of the house. This approach will not represent the “reality on the ground” in the most effective way.

If we attempt to isolate the artifact scatters associated with the houses in the area by excluding them from larger survey units or make them the center of small units focused on the artifact scatters, we have introduced a rather unconventional method to the area and risk producing data that is not necessarily consistent with the data that we’ve collected from elsewhere in the survey area.

We are stuck between the rock of needing to manage modern abundance and the hard place of treating all material from our survey area with a consistent method. 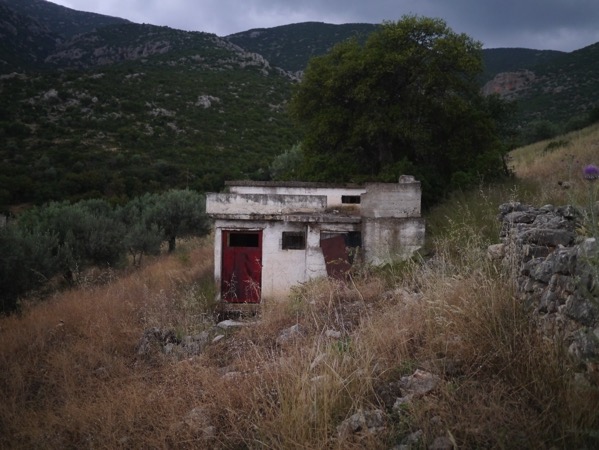 2. Architecture. We also need to think about how we are going to document the houses at the site. The houses preserve hints of a wide range of archaeological processes, modifications, and uses. David Pettegrew and I considered many of these same issues in our work to document the site of Lakka Skoutara in the southeastern Corinthia. It’ll be a great opportunity to encourage students to look closely at a building in the landscape and to consider how material transitions from its primary context to an archaeological context. At the same time, we’ll need to provide some consistent guidance to ensure that the students, team leaders, and directors document the buildings in a consistent way while also being able to describe each building with as much detail and nuance as possible.

We need to figure out whether it is worth doing some illustrations of the houses or should we rely on photographs to capture details that might elude textual descriptions. I generally favor taking the time to illustrate the houses because it forces the documenter to slow down and notice small details that might not appear as clearly through the photographer’s view finder. At the same time, there will be a need for efficiency so we will almost certainly have to document the houses in as efficient way as possible.

3. Features. The final issue is that houses stand in relation to other features and these clusters of features need to be identified and documented. Like documenting architecture, we need to decide whether to produce illustrations that capture significant detail, rely on textual descriptions, or create a set of maps that emphasize particular spatial relationships.

We need to proceed efficiently and capture data at a scale that is relevant for the kinds of arguments that we intend to make. In an ideal world, we could collect “all the data,” we fortunately occupy a world where “all the data” is not a realistic or helpful goal.