We have two inspirations for this week’s podcast.  ASOR series has a fun series: “What’s in your dig bag.” And Bristol carried out the most amazing archaeology of a van project:  The Van/InTransit.   Be sure to watch the van movie.  And some van blogging.

Since Richard had a chance to talk about what’s in his field bag, I thought I’d add my bag’s contents here. (I did a version of this a few years ago with my more serious bag). I’m a survey archaeologist who works in the Mediterranean so my bag tends to be a bit less comprehensive than Richard:

[It’s a busy week in ND, with Bill prepping for a field season and Richard doing suit-wearing type activities at the State Capital, so consider this a keyword list, not prose].

Bill prompting Richard to keep the episode moving along.

Bill refers to Richard’s bag as a “stable entity”

Richard explains his technique to label photos with a white board, and Bill asks a critical question.

Bill discusses the importance of tags and how to get them right.

Bill and Richard discuss why notebooks and pencils.

Richard and Bill tell the secret tales of abusing the generosity of the OSU Isthmia excavation vehicles, and learning how to be self-sufficient archaeological grownups.

Bill explains how city design impacts the location of bus stations and hotels through amusing stories.

Bill and Richard talk about how travel difficulties and how they make partnerships strained.

Secrets of owning a vehicle as a foreigner immersed in a Byzantine bureaucracy.With actual lead seals!

Toward the end we tell THE CARBURETOR STORY and THE STOLEN BACKPACK stories.  They are epic.

Dimitri Nakassis on wandering and why he likes archaeology.

Episode Postscript:  Richard had an on-air epiphany when he realizes he did something terrible to Bill, and that event hardly registered in his memory.  Listen to get the story, but here is some additional information Paige Rothaus provides: The event occurred the year the Gypsies asked us how to use a passport to get to America.  That means this was the year Richard was doing a great deal of work at Lechaion and he befriended the young men at the Gypsy camp so that he could leave his equipment around and not have it “disappear.”  By the way, Romani is a better term than “Gypsies”, but no one understands what you are saying if you use “Romani”.)

The opening track on the podcast is 80-R’s Pacific Rim.You can listen to it in its entirely here.

The front of the OSU Isthmia van, with a very young Bill Caraher and backpack (which probably he doesn’t have anymore [Bill note: actually that’s the replacement backpack, which I do still use!]), and David Pettegrew with backpack (and very handy belly pouch) and, um, a fine staff member.

The back of the OSU Isthmia Van, with Richard Rothaus and Carol Stein planning some awesome discovery.  Also – notice the tool belt.  For many years I was a tool belt and canteen guy.  That works when you have minions to carry things for you. Richard once left his pack on the wrong side of a mountain and everyone got an extra 2 hrs in the van to remedy the error.  After that, a minion was assigned to “always know where Richard’s bag is.” 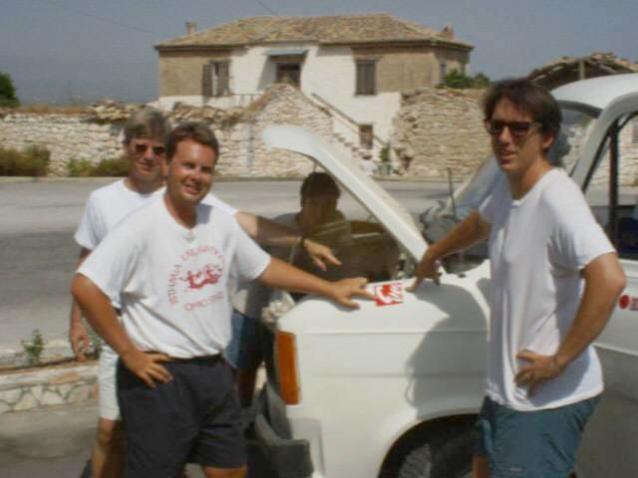 The OSU Van with Sam Fee, Nathan Meyer, Dan Pullen, and, um, a fine staff member.  This is after the van caught on fire.  Again.  A “Call for help if this van bursts into flame” sticker has just been attached. 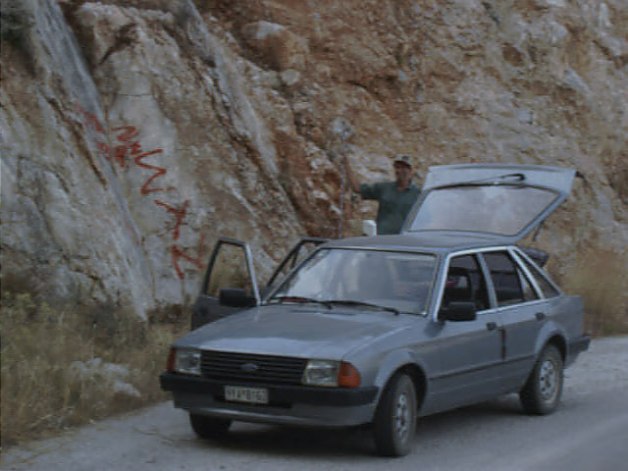 The Grey Escort!  With Tom Tartaron, who apparently just spray painted Συν[ασπισμός] on a rock.  Συνασπισμός is one the many Greek political parties.

The OSU van with Ed Reinhardt, um, a fine McMaster Student, Amber Demorett, Lee Anderson, Ben Rothaus and Richard Rothaus.  We are tieing metal tubes onto the van so Dr. Reinhardt can do vibracoring in one of the Korinthian marshes.

Oh no!  Greece is on fire and Richard needs to get to the airport, or ice cream, or something.