I’m super happy to announce the seventh annual Cyprus Research Fund Lecture. This year, we’ll be joined by Andrew Reinhard of the American Numismatic Society, in person, and Raiford Guins of University of Stony Brook, online, as well as Richard Rothaus (NDUS) and Bret Weber (UND, Social Work) to view and discuss the documentary Atari: Game Over. A showing of the film and a round table discussion will occur from 4-6 pm on April 9 at the Gorecki Alumni Center on the beautiful campus of the University of North Dakota. As per usual, the event will be streamed to a global audience.

But wait, there’s more! The good folks in the Working Group for Digital and New Media are coordinating a “legacy media” exhibit where we’ll have a working Atari 2600 and Atari 5200 that folks to come by and play. We’ll even have at least one game hooked to an old school CRT television.

This year’s talk is pretty exciting because we’ll go beyond the standard format of lecturer at the podium and bring something interactive to the event. It will also be the first Cyprus Research Fund talk that will specifically deal with work in which I was involved (although David Pettegrew’s talk from 2010 included some nice photos of me in Greece!). As readers of this blog know, I participated in the Alamogordo Atari Expedition which Andrew Reinhard coordinated and directed. We wrote up some of our observations in an article for Ian Bogost’s Technology page at The Atlantic, and Andrew Reinhard has been on a global speaking tour.

This will be the first time that the academic archaeology team has come back together to reflect on the documentary (which I review here) and the idea of excavating a fragment of our recent past. We’ve chatted informally across social and new media platforms and periodically in person, but we haven’t had a chance to sit down together and think critically about what we experienced. I hope that this will be the first of a few chances to do that and to make our thinking together as public as possible so that the community can feel involved in understanding the significance of their own past. 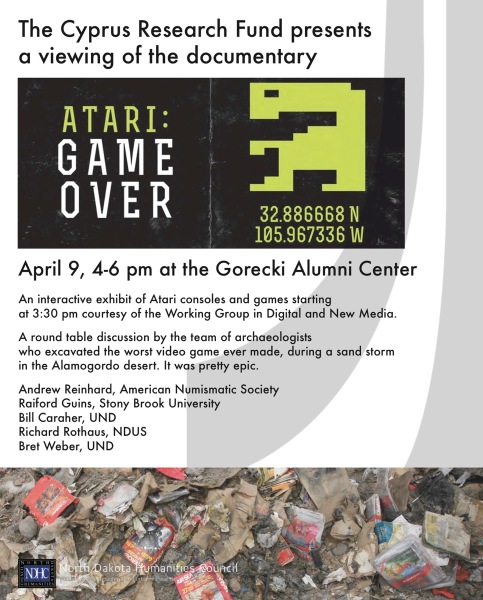