Over the past six months, two of my colleagues, David Pettegrew and Tom Davis, have quietly been working to get things started on my next big project. By December 2015, we should have assembled over 30 contributions to the Oxford Handbook of Early Christian Archaeology.

In the US, the study of these buildings and objects tends to be subsumed into the larger project of Late Roman or Early Byzantine archaeology which, to be completely honest, is where I tend to associate myself academically. This field, however, has tended to emphasize the transition from the ancient to the post-ancient (Medieval? Byzantine?) worlds and the political, economic, and aesthetic issues related to this transformation. To my mind, the best recent scholarship in this field has been related to trade and economic questions and the impact of political and social change on Late Roman urbanism (and by extension life in the Late Roman countryside). Important contributions in Late Roman religion have tended to focus on the change from paganism to Christianity and the impact this change had on institutional and social structures. These are all worthy points of emphasis, and I’d argue that the field of Late Roman archaeology has played a key role to establish the discipline of Late Antiquity as a significant focus of scholarly attention.

Our handbook will shift the focus a bit from questions of continuity and change in a broad Late Antique context, and consider the emergence of Christianity both as a religion, but also as a totalizing discourse, to invoke Foucault by way of Averil Cameron. This shift in focus will produce a handbook of greater use to students in seminaries, theology schools, and Bible colleges who often ask different questions of archaeological material than scholars of Late Antiquity or the Mediterranean. Primary among the questions of interest to students of Christianity is the relationship between material culture and texts. Our hope is to go beyond a focus on realia (that is objects that appear both in texts and in archaeological contexts) to consider the broader material context for Christianity as it existed both within and outside of textual accounts. 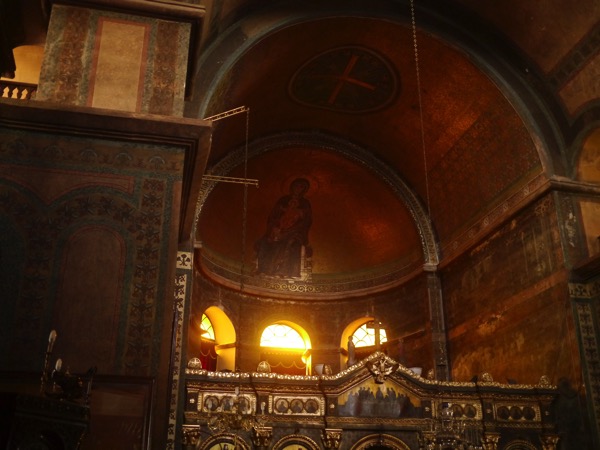 One of the sections that I’ve agreed to co-author with David examines sacred places and landscapes of the Early Christian world. Our goal is both to set up a series of essays on churches, martyria, house-churches, baptisteries, baths, and monasteries and to consider how these places fit together to contribute to a Christian material world. In particular, I want to explore the question what is a Christian landscape.

1. Sacred and Secular. One major theme in the study of the Late Roman world is the momentary appearance of the secular that preceded the emergence of a universal Christian discourse. With the retreat and suppression of paganism, certain practices were left without a clear religious context in Late Roman society. These secular spaces could involve the artistic invocation of traditional pagan deities shorn of their ritual associations, scenes of authority outside the institutional power of the church and without clear foundations in the emerging Christian cosmology, and even the realm of everyday interactions between pagans and Christian depended on a middle ground respectfully devoid of overt religious expression. Thus the Christian landscape is a place of both places clearly articulated within a Christian cosmos, and non-places that at least for a moment in Late Antiquity no longer represented a pagan threat, but still had no place within the Christian discourse.

2. Buildings and Landmarks. The role of church buildings in organizing and articulating space in the Late Roman city is well known, but scholars have not entirely escaped the approach dictated by the great Richard Krautheimer in his Three Christian Capitals. His approach was saturated with the political maneuvers of the imperial elite during a particularly fraught time in Roman history. The city and its churches expressed the political aspirations of the both the institutional church and these building’s elite patrons with little view toward the communities who lived, worked, and worshiped in and around these buildings. The spread of Christianity likewise had an impact on older monuments and places within the city which increasingly took on new significance for Christianized communities. Unpacking how Early Christian communities received and understood both explicitly Christian and earlier monuments represents an ongoing challenge to a construction of an Early Christian world.

3. Moving through a Christian Landscape. Central to any effort to understand the meaning of landmarks and buildings within a Christian context is grasping movement. Recent work on Early Christian pilgrimage across the Mediterranean complements work on stational liturgies within urban settings to establish the significance of some large-scale public movement through the landscape. These studies with a few notable exceptions, however, have tended to be anchored by monumental architectural and impressive urban byways. At the same time, archaeologists are thinking more broadly about the routes and paths that construct relationships between spaces and places in the ancient world. Linking informal routes and paths to Christian monuments and places will be a key way to share the world of public ritual with the everyday movement of private life.

4. Time and a Christian Landscape. The continued importance of memory in construction landscapes means that we have to start to consider both the visible monuments, but also those less visible places where social memory and the history of the community intersect in every day life. I think the long tail of the Early Christian period has particular significance here as the ruins and remains of Christian monuments often remain important places in the landscape long after they have ceased to function as places of regular worship. It will be particularly valuable to understand how the long life of buildings, the memory of ruins, and archaeological practices from long before the advent of the modern discipline shaped our understanding of the Early Christian material world.

More on this soon and note the new category!