It was really fun to see Aaron Barth’s maiden major publication this weekend in The Public Historian 35 (2013): “Imagining a Battlefield at a Civil War Mistake: The Public History of Whitestone Hill, 1863 to 2013”.  He tells the story of the monument at Whitestone Hill in North Dakota. The monument marks the spot of a particularly heinous assault on a group of Native Americans in September 1863 by Alfred Sully and commemorates the death of some 20 Union Soldiers in the clash. The monument was set up in 1909 as part of a larger project to demonstrate the triumph of “white civilization” and to integrate North Dakota more fully into a national narrative that made the Indian Wars the Western equivalent of the Civil War. 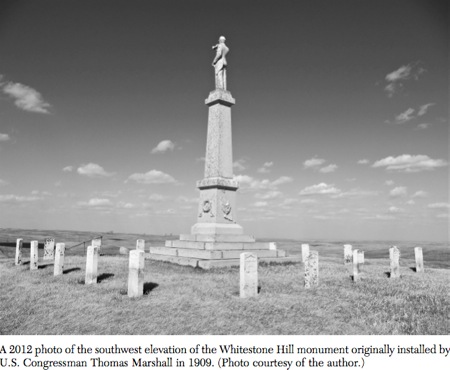 Among the more interesting tidbits in this well-researched article is that the founder of the Whitestone Hill monument was a Congressman Thomas Marshall who cut his teeth as a banker, surveyor, and mayor for the town of Oakes, North Dakota. The link between governing, surveying, and settlement is interesting in a North Dakota context as so many towns were established on a speculative basis. The creation of a monument and the surveying of the battlefield contributed to the larger project of defining the North Dakota landscape and partitioning it into understandable parcels that represent economic, commemorative, and administrative area. In short, it is poetic that a surveyor would be interested in creating a commemorative landscape in the state.

A series of murals dating to 1912 at the nearby Dickey County Courthouse in Ellendale further reinforced the place of the monument within the North Dakota landscapes. The various images present the history of the region showing Native American hunters, early European settlers, and thriving farms. The north elevation of the mural shows the “battle” of Whitestone Hill embedding this event within a path from hunters to settled farmers in the area.

Soon after the monument was erected (and almost certainly during Sully’s life), the circumstances of the “battle” came under dispute and a critical conversation emerged surrounding the ruthless acts of the Union troops. Theatrical productions and public comment introduced counter-narratives that challenged the view within 5 years of the monuments dedication. A local clergyman, Rev. Aaron Beede declared the battle a mistake and wrote a play giving voice to Native American perspectives on the event. Barth argued that this play was the first step in publicly articulating an alternate view of the events at the battle.

I wonder if there was a slightly earlier precedent: on the first Memorial Day event at the monument, the University of North Dakota’s own Orin G. Libby provided a lecture titled “Our Earliest History.” Libby was a student of Frederick Jackson Turner and was generally sensitive to Native American history in the region. Perhaps Libby’s address provided the first critique of the site’s controversial history. Libby was also an important member of the Mississippi Valley Historical Association, which met around the same time on UND’s campus. This group sought to emphasize local history, historical sites, and the core values of what would be formalized as public history many years later. If any comments existed amidst his voluminous papers, it would have been a valuable addition to this nice article.

One thing that is notable about this article is that it relied rather heavily on official account drawn from textual sources. Barth is a historian, so I appreciate his wide-ranging research into the history of the site, but he’s also an archaeologist. With a site like a monument, as I am sure Aaron knows, dissenting opinions often appear outside of the view of texts. I finished the article wondering whether the monument ever served as a place of protest for Native American groups or as a location of mourning for the massacre that it commemorated. The signs were and are likely subtle. Object left behind, the faint traces of gathering, and alternate rituals that subvert the intended message of the site.

As he continues to research this site as part of his dissertation, I’ll be excited to see how his work develops. And check out his blog here.