This is the third in a series of posts exploring 3D modeling in Mediterranean and European archaeology. For more on this project click here. We hope these papers will start a discussion either in the comments of the blog or on Twitter using the #3DMedArch hashtag.

Bill’s invitation to write up some thoughts on 3D modeling in Mediterranean archaeology came at a welcome time for me, as I had just co-directed the first season of a project imaging the Linear B tablets from the “Palace of Nestor.” The project makes use of two 3D technologies: Reflectance Transformation Imaging (RTI) and 3D scanning using a Breuckmann smartSCAN 3D white light scanner.

I should probably take a step back and explain the project a little. The project is co-directed by myself and Kevin Pluta; also participating are James Newhard, who in handling the informatics, and Benjamin Rennison, who was running the white light scanner. We were assisted by Jami Baxley, an undergraduate student at the College of Charleston. This project is an extension of a much longer-running project to publish the Linear B tablets from the “Palace of Nestor.” This material was assigned to Emmett L. Bennett, Jr. by the excavator of the palace, Carl Blegen, and in the first volume in the Palace of Nestor series, Blegen announced that the publication of the tablets would constitute the fourth volume. That volume has not yet materialized, in large part because much work remained to be done — for years the editors of the volume have been making joins and revising transliterations. Kevin and I are directing the resumption of work on the project.

Corpora of Linear B texts follow a time-tested formula that has hardly changed since the beginning of Linear B studies. For each text, the reader is provided with a line drawing, a photograph, and (post-decipherment) a transcription:

Caption: the line drawing and photo of a tablet from Scripta Minoa II

This formula is useful, but of course it is somewhat limited by the print medium for which it was designed. Ultimately, the problem is that the standard corpus is a record of how the editors see the tablet. It relies on editorial authority. The line drawing is of course an interpretation of what the editor sees, not an objective record of what is actually present. The photograph is arguably an objective record, but rarely is it high-resolution enough as printed for a scholar to use to overturn an editorial reading.

A 2007 article written by Yves Duhoux illustrates some of the problems of traditional corpora. Duhoux argued for a new reading of a fairly famous tablet, Knossos F 51. Duhoux was able to show that previous editors had seen a vertical line that was actually an accidental scratch on the tablet’s surface. In order to clinch his argument, Duhoux reproduced a high-resolution image of the tablet and another image in which he zoomed in on the sign in question. This latter image was about 1″ x 1″, about 16 times larger than its size as printed in the Knossian corpus. The sign had been incorrectly identified more than once by the most experienced and careful editors in Mycenaean studies, and the word to which it belonged become the center of a debate about Mycenaean religion sparked by the discovery of Linear B tablets from Thebes in the mid-1990s. In this case, then, the reading of a single sign had enormous scholarly implications.

When we began to think about how we wanted to document the Pylos texts, these issues were front and center for us, and we started to look at what other people were doing with similar documents. I was kindly shown the operations at the Oriental Institute at the University of Chicago, which was using RTI to document tablets from the Fortification Archive from Persepolis. I also met with Yannis Galanakis at the Ashmolean, who was already arranging for a team from Southampton to use RTI to document the handful of Knossos tablets in their collection. That work has now been published online.

This past summer (2013), then, we began our first season of documenting the Linear B tablets from Pylos using two new techniques, RTI and 3D scanning. We see RTI as a replacement for traditional photography. Briefly, the way it works is that we take 54 images of each inscribed surface of an artifact, mostly clay tablets but also clay sealings and labels. For each photo, the artifact and the camera are static, with the camera pointed straight down onto the surface of the tablet. What changes is the position of the flash, which we move manually. We photograph the tablet from 9 positions on the horizontal plane, and for each position we take 6 pictures from different angles, from 15 degrees to 65 degrees. The process of taking these photographs takes less than 2 minutes. 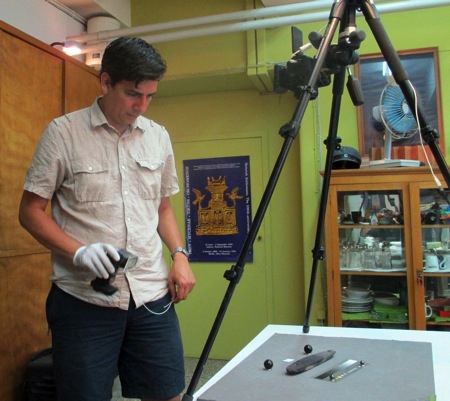 The result is the production of a PTM (Polynomial Texture Mapping) file which records the color of each pixel as a function of the lighting conditions. (See here for a more detailed description of how RTI works). These PTM images can be manipulated in an interactive environment using several free programs, allowing the viewer to change the directionality of the light source to best illuminate the particular sign that s/he is interested in.

Unfortunately we do not have permission at this time to reproduce the images, but the PTM files made available by the Ashmolean illustrate the value of this approach. One of their tablets, KN Ra 1540, is a fairly straightforward text that is transcribed “to-sa / pa-ka-na PUG 50[“, which we could translate “so many swords: SWORD 50.” Here is a straightforward color image and its black and white counterpart (which is what we would get in a printed edition):

Slightly odd for those familiar with the Linear B script is the sign na (immediately to the left of the sword), which is damaged by a break running vertically through it. Because pa-ka-na means “swords” (phasgana, cf. Greek φάσγανον, plural φάσγανα), we know that it must be a na, which normally looks liks this:

But using the RTI viewer we can zoom in on the sign (because the images were taken with a high-resolution camera) and reproduce the effect of raking light on the tablet, producing this figure: 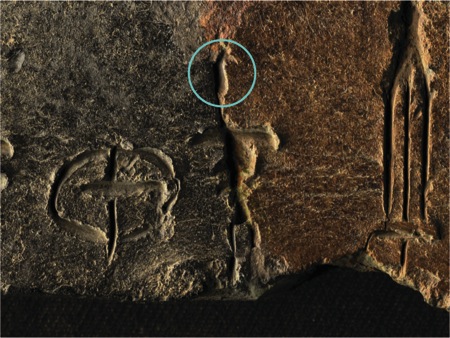 What this shows fairly clearly is that the mark above the “na” (circled in light green-blue) is not an intentional mark inscribed by a scribe, but is rather part of the damage to the tablet. All of the other intentional marks were made when the clay was wet, and the raking light clearly shows the lip of clay around these incisions, created by the writing process. The unintentional mark shows no such lipping, and must have occurred after the clay was hard.

This isn’t a great insight; the size of the signs is such that it’s likely that any mark above them isn’t intentional (note that the horizontal stroke from the <i>na</i> is at the same position as the height of the sign to the left, a <ka>). But such observations are important, as Duhoux’s article shows, and these RTI files allow researchers with access to the internet to examine the tablets at a level of resolution that approaches autopsy.

For us, this is the main take away for the use of RTI. It’s not just a fancy photograph, but it allows us to redistribute the authority of the editor to all interested and qualified users. This doesn’t mean that traditional standard corpora are useless, of course. Sometimes one wants to consult the texts through the editor’s expert eye. On the other hand, for those who are interested in editorial decisions, RTI gives them the opportunity to examine the tablets at a level of detail that would allow them to develop their own readings. At this point, I’m not convinced that our PTMs are superior to autopsy, but the advantage of the PTM files is of course that unlike the tablets, they are digital files that can be readily shared. This suggests a second advantage of RTI, which is the conservation of the Linear B tablets. The less the tablets need to be handled, the better it is for their management.

This addresses Bill’s first and fourth prompts: RTI, I’d argue, is qualitatively different from photography, at least in the case of this type of inscribed document. A photograph represents a tablet, but doesn’t even approximate autopsy. RTI has the potential to radically change the field from one in which editorial authority rules supreme and is the foundation of all subsequent scholarly practice, into one in which editorial authority is dispersed and all experts have the ability to read the texts for themselves. 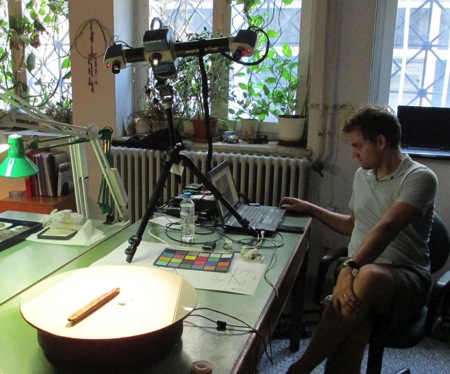 The other method we used was 3D scanning using a white light scanner, generously loaned to us by Breuckmann. I’m going to talk about it less, in part to save space and in part because I was less active in this aspect of the project. This scanner works by projecting a sequence of fringe patterns (black and white lines) onto the tablet, while two cameras capture the projected pattern in full color. We also had a turntable that allowed us to turn the tablet without moving it by hand. This scanner provided us with high-resolution three dimensional models of the tablets in color. We wanted to use the 3D scanner in conjunction with RTI because unlike past editions, we wanted to record the tablets as three-dimensional objects. The tendency in most textual corpora is to flatten the artifacts and to reduce them to writing. This is, of course, a convenience that is made necessary by the limitations of the printed corpus. Kevin Pluta and I, both of whom had studied the tablets for 15 years or more, were constantly astounded by the variety of shapes and surfaces that the tablets came in, which demonstrates the extent to which our scholarly tools suppress the physical form of the inscriptions. We also wanted to document and understand the manufacture of the tablets and the physical shape of the tablets, including the non-inscribed surfaces (most tablets are inscribed on only one side; fewer are inscribed on both sides; a very few have writing on the edges). The tablets are, after all, artifacts, yet very rarely have they been treated as such. Cross-sections of Linear B tablets, for instance, are not drawn.

Between these two methods, we’re hoping to provide scholars with a digital corpus of the administrative texts from Pylos (once we get permission) with PTM files and 3D models, along with other data and metadata (like precise archaeological findspots). This corpus will provide much more than any print edition could ever hope to. RTI and 3D scanning will provide the user with highly accurate renditions of the color, shape, topography, and texture of each and every administrative document from Pylos. There are two closely-related advantages that we see to this digital imaging. First, we anticipate an improvement in the conservation and archiving of the physical artifacts, since the availability of high-resolution images in two and three dimensions will reduce the need for their study and handling. Second, a digital edition provides users with the ability to work interactively with the administrative documents in a digital environment. The resolution of the imaging is such that it even permits users to propose new readings and joins. This allocation of high-quality primary data to scholarly experts represents an exciting development. Far from being merely an enhancement of standard methods of illustration, these imaging techniques have the potential to transform the field by distributing control of the primary data to all qualified experts.