This summer I found myself in the worrying position of being too out of shape to be a field archaeologist. I am fairly sure that I’m not the only Mediterranean archaeology who has found himself in this position. In fact, one of the real issues with our fieldwork rhythm is that we tend to work frantically for 6 to 8 weeks and sit at a desk for the other 40 or so weeks of the year. Contract archaeologists (who we all both admire and pity) have a much more regular routine of fieldwork and tend to remain more “fieldwork fitness”. As a colleague of mine sagely put it academic archaeologist tend to garden, contract archaeologists farm.

My profound lack of fitness became clear during a short hike into hills above the Akamas peninsula in Cyprus with my colleague Tina Najbjerg. The day was mild, the scenery striking, and there was even some interesting archaeology to keep my mind on things. Within 10 minutes of us starting our hike, however, I was gasping for air and watched helplessly as a slightly obese German tourist waddled past me on the trail wearing flip-flops and board shorts. This was not a good sign. 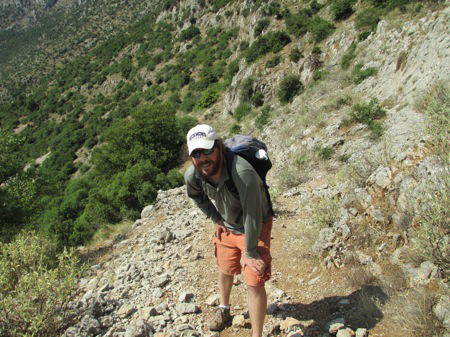 I survived the hike – with only some griping and groaning – but became aware that some of my previous prowess as a landscape archaeologist was at risk. In fact, I was be concerned that I could no longer engage the landscape in haptic way outside of crunch of gravel under foot between the car to the shaded work room. For those of you who know my work, some of it derived from a willingness to hike up to the top of Mt. Oneion in the Corinthia (about a dozen times!), to wander the rocky environs of Vayia bay, and to explore abandoned settlements in secluded valleys. I realized that I probably would struggle to do the kind of fieldwork that I enjoyed and capitalized on early in my career.

It’s not like I live a completely sedentary existence. I like to walk here in North Dakota and found that reflections on walking have often informed my fieldwork. Observing the subtle changes in neighborhoods through time has informed my growing interest on materiality in American consumer culture, domesticity, and suburban or small town archaeology.  But leisurely walks on small town streets did not prepare me to hike into the mountains of the Argolid. Even when I could make it up the sides of hills to see spectacular and utterly undocumented sites, I knew that I didn’t have the energy to document anything carefully or thoroughly. As I looked ahead to my next phase of fieldwork, this was a real concern.

Following the lead of some other archaeologists, I decided to do something to get in shape. I am not sure that I am ready to, say, walk (much less run) 100 miles through the North Dakota badlands, but next time some such insanity happens, I’d like to be invited (rather than just dismissed with a laugh). This month, I’ve started to get into shape. I’ve begun to run some (actually it is more of a shuffle punctuated by a limp) and I got my old bike fixed up for some local bike rides and I’ll probably invest in a magnetic trainer to do some work in doors this winter. As one might expect, my knees ache and my body seems to be rejecting the experience of exercise in a mildly violent way.

I have seen some improvements though. My resting morning heart rate has dropped from about 55 to the lower 50s and I feel significantly more fit on my runs. The pain of moving my legs and bending my knees remains the limiting factor, but I am getting better at living with nagging pain. I am optimistic that this will allow me to be in more professional shape by next summer (or require significant surgery or “sports related injury” blog mediation …). My goal is to get my morning heart rate solidly and consistently in the 40s and be able to get to my office without breaking 55.