Andrew Reinhard gives us the scoop on the punk mentality and linked data practices in archaeology.

So on Tuesday, I had a sweet guest blogger and people really liked it. So when Andrew Reinhard (a punk archaeologist of the highest order) wanted to post something here, I not only couldn’t say “no”, but I couldn’t say YES fast enough. And when he wanted to talk about  what he learned at the Linked Ancient World Data Institute (#LAWDI), I was all in.

(This is the SECOND time in less than 6 months that I’ve been lucky enough to introduce Andrew to the uninitiated (which I was as well about 8 months ago)).

So here are Andrew Reinhard’s thoughts on linked archaeology and punk archaeology:

“The idea that there’s such a thing as ‘final publication’ of archaeological material is bullshit.”

I said this to a room full of colleagues all of whom had a stake in the new-new thing: Linked Ancient World Data (or LAWD). The cool thing? Nobody disagreed.

The Linked Ancient World Data Institute (#lawdi) was an open source love-in funded by an NEH Digital Humanities grant spread over two spring, 3-day sessions. The first session was held in 2012 at the Institute for the Study of the Ancient World (ISAW) in New York City, and the second concluded this past Saturday, June 1st, at Drew University in Madison, New Jersey. LAWDI, the collective brainchild of Sebastian Heath, Tom Elliott, and John Muccigrosso, was created to bring together a diverse and progressive band of scholars, librarians, and museum professionals of the ancient world, many of whom were also technologists, to explore the nature of Linked Open Data (LOD) as it relates to antiquity and how to share it across the Internet.

Ours was a multinational, happy band, female and male, older and younger, tool-builders and tool-users, some with projects completed, and others with projects just underway, some facile with the finer points of RDF and SPARQL, others not so much, yet all demonstrated good faith in the belief that we could help each other learn. And link. There were no Luddites here. There were only LAWDites.

Assaulted by unseasonable heat and humidity, we embraced “Digital Humanities chic”—cargo shorts and tshirts, flip-flops and sandals. This was Open Access fantasy camp fueled by coffee and alcohol. Run more like a workshop than a formal conference, papers were replaced largely by practice, jumping in feet first to understand what RDF is, what the difference is between a URI and a URL, how to mint URIs, how to make archaeological data discoverable and usable. “My data is your data, and your data is my data,” Tom Elliott said in 2012.

We followed the Freirean model of student-teachers and teacher-students, each learning from the other. Numismatists like Andrew Meadows and Ethan Gruber demonstrated the open data masterpiece that is Nomisma.org, while Dan Pett of the British Museum modeled his Portable Antiquities Scheme as a crowd-assisted project. Chuck Jones of the ISAW library discussed its digital collection practices and followed up with an Open Access tour de force via the Ancient World Online’s collection of over 1,200 OA journals on antiquity worldwide. Eric Kansa demoed his OpenContext.org site for hosting and sharing archaeological projects and there data. Sebastian Heath and I attacked issues in archaeological publication from two fronts, Heath by way of XML, HTML, and ISAW Papers, and me by way of making digital, linkable content available alongside traditional print publication.

Parts of each day were dedicated to “student” presentations, where both nascent and established projects in linked archaeological data were showcased, many of which came prepared with questions ranging from how to prepare data for global consumption, to how to link to established online geographical tools like Pleiades and Pelagios, and beyond. William Murray discussed his 3D project with ships’ battering rams used in the Battle of Actium. Rebecca Benefiel and Sara Sprenkle presented their prototype of a new web application involving the ancient graffiti of Pompeii. Katy Meyers argued for the need for open data in bioarchaeological collections and mortuary site datasets to avoid a sampling bias that limits interpretation of that data. There were a dozen more presentations like these on interesting, useful projects.

Each speaker came ready to share, ready to ask questions, and ready to receive help. The spirit of LAWDI created an incredibly supportive environment that allowed for free (and ego-free) dialogue about what to do with archaeological data not just to bring it into the world, rescuing it from inside a silo or behind a paywall, but also how to connect with tools and websites already in use in order to make data on anything from findspots to artifact types to cuneiform inscriptions more open and more useful in ways the holders of that data might not have even imagined.

Dinners and late-night hack-a-thons followed each day’s sessions, with smaller groups spiralling off to attack specific problems of ancient geography or naming authorities with code, or to discuss problems of archaeological data in a more theoretical way, supplemented with breaks in the action for air-guitar, rugby scores, and beer-runs. By the end of the BBQ on the final day, our brains were beyond full, but the inertia and creativity driven by the constant conversation carried all of us home to immediately begin working on existing projects and the next, new-new things for our respective disciplines.

If the above doesn’t sound “punk-rock”, it should. We turned the traditional conference structure on its ear and skanked on its head. Most people in the room over those three days had already embraced the DIY (do-it-yourself) attitude shared by all punks. If a tool doesn’t exist, build it. If you have a question, ask it. If you can help somebody, do it. The spirit of community was evident, and all LAWDites formed a tight bond by the end with the sense that we’re all in this together, and what we’re doing is for the greater good.

Many projects are either under-funded or are done for free, hand-coded in basements late at night or early in the morning, at times built with tools never intended for the purpose to which they were put. A big part of Punk is making noise with the instruments you have, learning by playing, and getting better by playing with others. Creativity thrives when there’s no money, and the Punk attitude drives us to find ways around these restrictions, often creating better, leaner end-products than if we’d had a bottomless pool of resources, time, and materials. We build because we have to. And we recognize the problems inherent in ransomed scholarship and in the old ways of thinking about archaeological data and how that data is/are made available. It’s Punk to question authority. It’s Punk to question the establishment. It’s Punk to question the status quo. We don’t do it to be subversive (most of the time). We do it because we feel there is a better way to go about the business of sharing information openly, and making that information easily discoverable and hopefully easy to use. It’s not about the money, and it’s not about the notoriety. But it is about the big picture and how we want to see the world. We live in it, and therefore we have a voice to change it if we want. That’s Punk. And that’s Linked Ancient World Data.

When I said that the concept of “final publication of archaeological material” is “bullshit”, I meant it with every cell in my body. Publication of archaeological data is the conversation-starter. While it might mark the end of the push for tenure, or the conclusion of the analysis of a pottery assemblage or hoard of coins, the publication contains the synthesis and ideas of only one author (or perhaps a handful). Who knows what other information can be gleaned by another set of eyes, another brain. How can that data be re-assessed, re-mixed, re-used, recycled? That questioning, that reconsideration is how we move our field(s) forward, and is how science works (or is supposed to work). And it’s also how Punk works. By checking our egos at the door when we submit our research, we can engage in an open and constructive dialogue with our current peers and those who come after, and our ideas on the ancient world will become more focused and occasionally overturned from those critical questions we weren’t afraid to ask.

Now that the Linked Ancient World Data Institute is formally complete with both 3-day sessions behind us, all participants find themselves at the vanguard of a Punk Archaeology movement. Join us online as part of the Linked Ancient World Data Initiative. Details of more formal meetups and hangouts, plus informal gatherings be they real or virtual, online or in London or New York or elsewhere, will become available soon and throughout the coming months. Better yet, don’t wait for these to happen. Do it yourselves. Use the #lawdi hashtag on Twitter. Subscribe to the Ancient World Online. Read the ISAW Papers. Google “Linked Ancient World Data” or “LAWD” or “AWLD”. You’ll find us. Be a punk. Join the initiative, and help create the new status quo of open, free, and shared archaeological data.

NOTE: I’ll update this post via the Comments area once the 2013 LAWDI program is open, as well as the Twitter archive and collection of links to get readers started. 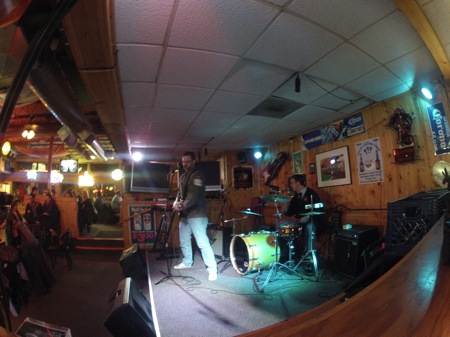