Last weekend we stopped by a Type 2/Type 3 man camp. As I noted on Tuesday, it appears that some of the residents had recently moved on (or been moved on). In fact, one could see where the campers had been because there was a gap in relatively recent snow. As we look toward publishing this photos, I am trying to figure out how to produce some text that complements Kyle Cassidy’s photographs without bringing them down with a toxic dose of academic prose. So here’s my first effort:

Kyle Cassidy‘s arresting photograph of one part of Man Camp 6: all that remained from a camper was a gap in the snow, a pvc pipe, an air conditioner, and a set of barbells.

In 2009, this site was an open field outside the small town of Tioga, ND (pop. 1,230 in 2010). By August 2012, the area featured several new apartment buildings under construction and a man camp of 27 units loosely arranged in 2 rows. At the south end, there were four “FEMA” type trailers probably brought north from Katrina Camps. The northern part of the camp featured a series of campers generally with water and electricity, but only the FEMA type units had sewage hook-ups. In the northwestern corner, tucked into the shelter belt stood a group of campers and tents without electricity or water. This was a Type 3 camp. Someone had put a port-o-potty in the camp. A local trucking company had set up the FEMA trailers to house their workers. Carpenters and other workers at local construction sites occupied some of the campers including the Type 3 camp in the northwest. Some of the residents of the Type 3 camp were still looking for work. Air photos taken in September of the same year, showed that at least a few of the campers with electrical and power hook-ups had pulled out.

The gap in the snow that Kyle photographed was at the north end of the western row, and we had photographed and described this very same unit in August 2012. The Augustus photographs show a “Yellowstone by Camino” camper with a small area under a camouflage awning set up with a makeshift tent post and rope on its west side. The area under the awning extended the space of the camper and protected a small outside area that featured buckets, a kennel for a dog, coolers, tools, a wheel barrow, propane tanks, gas cans, and extension cords. The contents under the awning would have been at home in a suburban garage. A full-sized, stainless-steel type, refrigerator also stood under the awning. A small plywood patio provided a step into the camper. A camp chair was the only hint at leisure at the site. A window unit air conditioner was stored in the shade unused. The resident of the unit complained about the noise from the Type 3 camp to his west in the shelter belt. 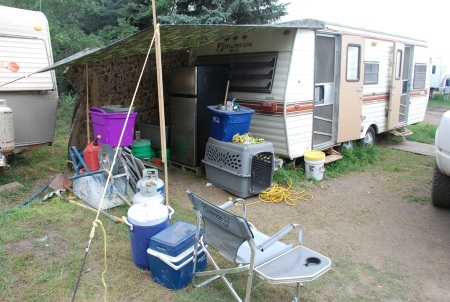 My photograph in August 2012