One of the coolest things about being at the University of North Dakota is that they have a College of Airplane Flying, and this – every now and then – gives us access to some pretty cool stuff. This past week, I was able to get some time on Upper Midwest Aerospace Consortium’s AEROCam to get some .5 m resolution aerial photographs of our man camps. The issue is (as I noted in an earlier post) that Google Earth images simply can’t keep up with the changes in the landscape and more recent and regular satellite images are prohibitively expensive or insufficient resolution to document the small scale changes that are taking place there.

In any event, we received close to 500 images last week and I have just begun to georeference them (although mostly in a quick-and-dirty way).

The two images below are among my favorites. It shows clearly the massive expansion of a man camp in an area that just a year earlier had been rugged and ravine filled land unsuited to local agriculture (but perhaps used at some recent point for grazing). 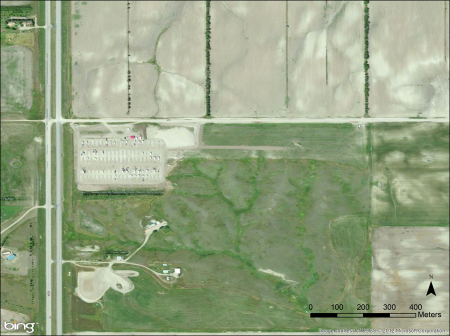 The ground leveled initially for the camp was completely filled in and new areas opened. At present the camp accommodates over 300 units. The masts for power and water run perpendicular to the units and parallel to the roads. The grey in the lower photo is the gravel bedding for the camp in an effort to manage the mud in the spring. The yellow roofed building in the center of the lower photo is an administrative building area housing the camp’s offices and providing laundry for the residents. The camp has the rustic name “Foxrun”.

The next pair of photos show the infilling of an almost abandoned town with RVs housing workers. 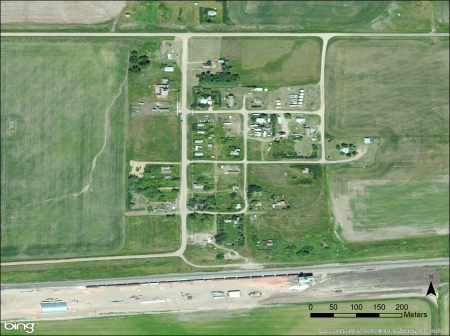 Notice the grey leveled gravel to the east of the town and the infilling of units (without the tell-tale gravel pad) crowded around houses located on the main east-west road. In the upper left of the town grid you’ll notice that the school house that appears in the first picture has collapsed in the second.

We are preparing our first academic paper on our research for the Midwest Association of Canadian Studies Conference this weekend. I’ll post a draft of it here when it’s decent.