On Friday, a buddy of mine called to tell me that he had the keys to an old and abandoned church in my neighborhood. Situated some 3 blocks north of my house, the church was a regular landmark on our neighbood walks. It sits on a corner lot in a turn of the century neighborhood that represents one of the first blocks developed from commercial purposes to residential in Grand Forks. The church was built in 1905 as Trinity Lutheran church. This congregation was founded in 1884 and moved the the current structure from a church (apparently) built in 1887.

In its original form the church had more impressive windows on its east and south sides. In 1944, the church suffered a significant fire, and by 1950, the windows had been covered.  This photo is from before 1918.

This photo is from after the fire. 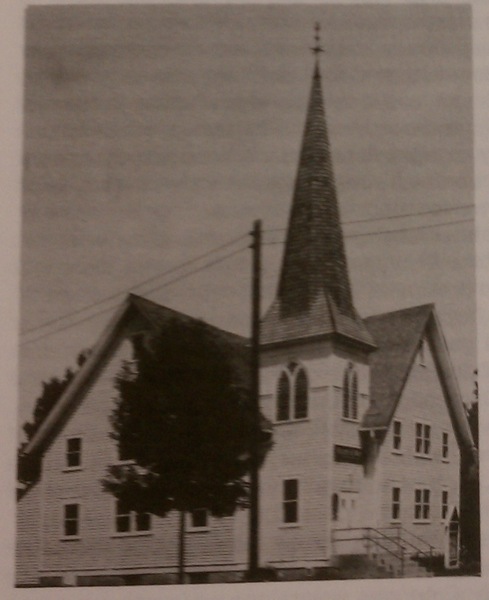 In 1919, the church was turned over to a Church of God congregation (an evangelical protestant group that may be associated with Pentacostalism or the 19th century holiness movement). It remained a functioning Church of God until the flood of 1997 when it reverted to city ownership. Some newspaper articles suggested that it served as a private residence for some time in the early 21st century, but there is no evidence for that in either the tax rolls or in the structure of the building.

The interior of the building has been “scraped”.  In other words, any thing of architecture or functinal value was removed from the interior.  The walls, however, seem largely intact, suggesting that the scraping did not extend to copper piping or electric wires.

Most of the damage to the interior derived from its abandoned condition. The roof leaked causing part of the ceiling to collapse. 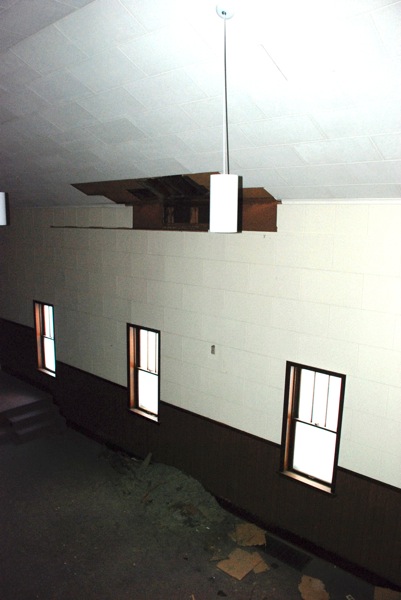 While the roof of the church was in difficult condition, the foundations of the church seem to be in better shape. Sections of the original yellow to buff (local) bricks remain visible showing that the church had a solid brick foundation and that it had been repaired recently (in the last 20 years) with a layer of concrete. 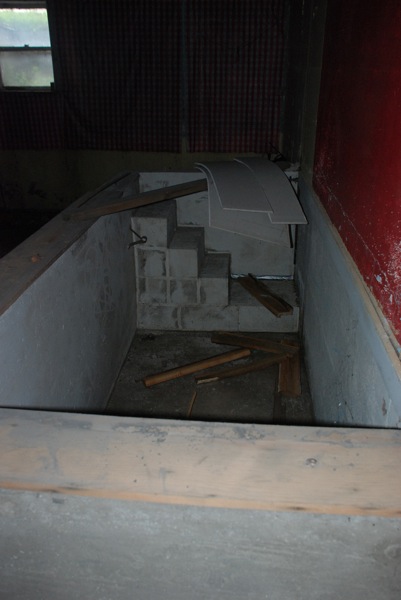 Some evidence for the great fire of 1944 remain where the roof was visible from inside the church. 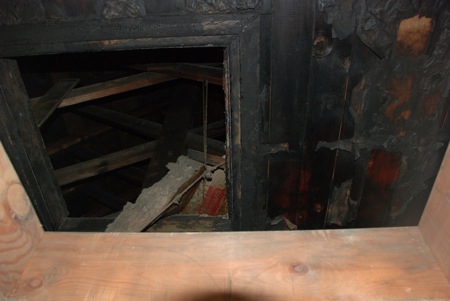 The fate of this neighborhood church remains uncertainly. At present it is the property of the city and some local organizations have expressed interest in acquiring the parcel of land (which includes a turn of the century home that served as the rectory). Pessemistic reports on the structural integrity, however, of the building have caused some people to recommend its demolition.  The church is a contributing property to the Near South Side historical district which also preserves several other architecturally significant (and mostly later) churches. Old Trinity Lutheran is unique in the area as it is one of the few remaining churches built on ordinary city lots and nestled among contemporary residental structures. It predates the more architecturally complex (and dramatic) Gothic revival Prebyterian Church (1910) and St. Mary’s Catholic Church (1918), and the Art Deco United Lutheran (1931), and is a contemprary structure to the Beaux Arts-ish Christian Science church (1904).  In fact, church is probably the second oldest standing church in town. The domestic and relgious buildings in the few blocks surrounding the church capture almost all of the major architecture influences on the community prior to 1950.

While the architectural integrity, needs of the community, and economic resources available to preserve the building are all considerations for preserving this church, its place in the urban fabric would seem to offer a strong case for its preservation.