This is a second in series of blog posts on the landscape of my childhood home: Part 1 is here, Part 2 is here.

As a kid, “the creek” provided an enduring source of interest and fascination.  The Creek itself was pretty modest.  In fact, it does not even appear on the standard hydrology map of New Castle County.  It “began” in a neighbors backyard and was fed by the local storm drains. It curled its way through “The Woods” (which I’ll talk about later) before merging with a larger creek around .5 km to the south. Needless to say, we did not have a particularly global perspective on the course of our creek, except that it flowed out from the safe confines of our neighborhood into the great beyond.

Like many of our pre-modern predecessors, we recognized that the creek could serve as a route out of our neighborhood and beyond. Generally, the acknowledged boundary of “our creek” was the footbridge at the western end of Windybush Road. For some reason the developers had not connected the neighborhood of “Old Windybush” with the “newer” subdivision. “Old Windybush” seems to only date to a few years before “New Windybush”. The oldest houses in Old Windybush appear to date to right around 1950. New Windybush to less than 5 years later.  There is no reason to assume that these two subdivisions were developed separately. 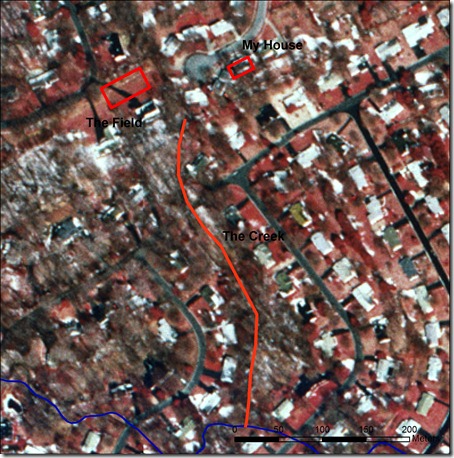 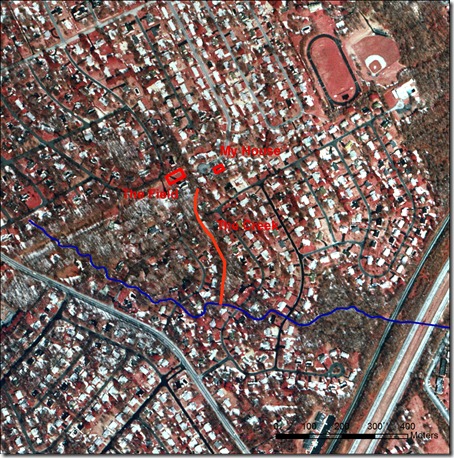 The Creek and Local Hydrology set atop 1992 Aerial photographs

In any event, the Creek continued to wander through backyards of Old Windybush before merging with another creek and continuing to the east. I have clear memories of ruins of perhaps an old farm house standing somewhere along the route of the creek. Examining the 1992 aerial photographs which were taken in the winter with what appears to be an infrared filter does not show any obvious buildings.

About .5 km from the confluence of our creek and the larger creek, the larger creek passes under the railroad tracks and the interstate, I-95. We rarely tracked the creek this far, but I do recall following it under the interstate.  Of course, this may not have been our creek, but Perkins Run to the north. About 1.5 km after passing under I-95, our creek joins with Perkins Run which empties into the Delaware River after another 1.5 km.

Perkins Run was the much more substantial creek and it ran through the woods to the East of Windybush pool. We certainly followed this creek for most of its course as kids and I remember discovering where it joined with the mighty Delaware (or at least where is passed under I-495).

As kids, the creeks were more than simply routes between neighborhoods. They were another example of “wastes” that fueled our imagination. We discovered salamanders, observed (what we thought to be) tadpoles, built bridges and dams, races boats made of sticks and leaves, inevitable fell into the water and got wet and muddy.  We also confronted the unknown as we adventured south out of our neighborhood. I have to wonder whether the engagement with the landscape so close to home influenced my decision to become an archaeologist. I clearly remember the thrill of going just a bit further along the Creek and being amazed at finding ruins so close to my own backyard.