A colleague emails me last night and noted that most of the mosaics in Ravenna have undergone significant restoration and conservation work.  Some of the earliest efforts to restore the mosaics and architecture date to the 18th century (and this discounts much earlier work that sought less to conserve older decoration and more to beautify the space of worship) and continues today.  As a result, like historians reading a text or archaeologist reading data, we should always be skeptical of what we see in front of us.

The churches of Ravenna, then, often serve to provide impressions of the architecture, decoration, and organization of the past. In the two better-preserved (and conserved!) basilica  style churches are particularly valuable spaces for contemplating the processional character of the Early Christian liturgy.  Marble colonnades separate narrow aisles from the main processional axes of these buildings.

At St. Apollinare Nuovo (above), female and male saints depart from the port city of Classis and from the palace at Ravenna respectively. 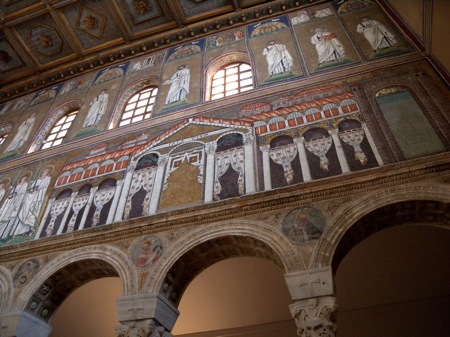 These processing saints follow the course of the liturgical processions toward the eastern apse and terminate at the virgin and Christ outside the sanctuary area of the church. 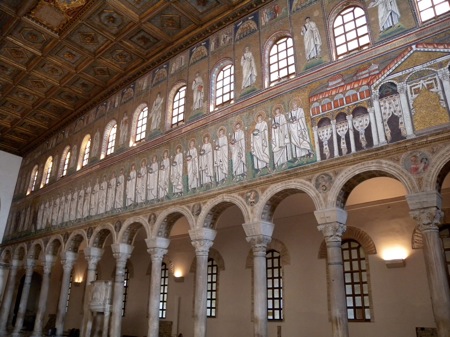 The processional mosaics are best visible from the aisles as was the main processional movement of the early liturgy. In contrast, the colonnades obscured the eastern destination of these processional rituals emphasizing the movement toward the east (and toward salvation) perhaps even more than its ultimate goal.

Here a massive cross floats above the head of the saint on the half dome of the eastern apse:

Angles holding pennants inscribed with the sanctus (Holy, Holy, Holy in Greek!) stand guard on either side of the main apse and ensure that key phrases in the liturgy echo always in the church.

In the 7th century, the imperial family, arranged in processional order themselves, joined the vigil at the eastern end of the nave.